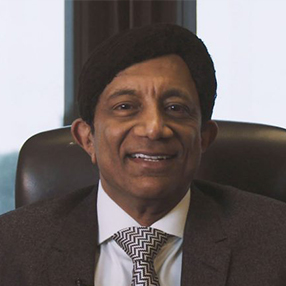 Today, Dr. Husseini Manji is the global therapeutic head for neuroscience at Janssen. In this role, he has researched the ways in which psychiatric disorders alter a patient’s cellular systems, resulting in symptoms or negative behaviors. He has worked to change the way neuropsychiatric diseases are perceived and treated, shifting research away from strictly analyzing chemicals to a more holistic approach that looks at a person’s unique genetic makeup. His work has helped to conceptualize neuropsychiatric illnesses as genetically-influenced disorders, and it has led to the investigation of novel therapeutics for patients who have not responded to previous treatment.

For example, bipolar disorder has long been thought to be the result of an over prevalence of neurotransmitters, such as epinephrine or dopamine. However, this theory does not explain why a patient can display wildly different behaviors in the depressive and manic stages; otherwise, symptoms would be more consistent. Instead, Dr. Manji has suggested that this disorder is ultimately caused by problems with protein networks inside the cells, which prevent normal functioning. This has led to new research toward greater care for bipolar patients.

Before joining Janssen, Dr. Manji worked as chief, laboratory of molecular pathophysiology & experimental therapeutics, National Institutes of Health, and director of the NIH Mood and Anxiety Disorders Program, and he founded and co-directed the NIH Foundation for the Advanced Education in the Sciences Graduate Course in the Neurobiology of Neuropsychiatric Illness. As a visiting professor at Duke University in North Carolina, Dr. Manji is also actively involved in medical and neuroscience education.

For his breakthrough work to help bring new treatments to patients, Dr. Manji was awarded the Research and Hope Award, which helps illustrate how biopharmaceutical researchers and others in the innovation ecosystem work together to not only bring new medical advances to patients, but thwart deadly diseases through increased awareness, public health efforts and increased collaboration.

To learn more about the revolutionary work being done in the field of mental health, please visit our recent Medicines in Development: Mental Health Report.